PLEASE NOTE:  All Pages will be frequently updated and improved.

The Septic Systems that are required by State Regulations cause devastating harm:                    They cause harm to our environment, our health and our economy. They cost $18,000-50,000 and even much more. The installations destroy many of our trees and gardens. Many eventually cause disgusting overflows inside or out.

But much more serious is the fact that they cause terrible pollution: they leach Nitrogen, and viruses, antibiotics, toxins, hormones (the “VATHs“) into our groundwater (our drinking water!), which then flows into our coastal ponds. After heavy rains, even the bacteria leach through, polluting our beaches and ponds, causing painful diseases. Boards of Health post “No Swimming – Polluted Water”.   As news spreads nationwide, mega dollars are lost as reservations for cottages, hotels, cars, bikes, boats, planes and restaurants are cancelled.  It’s truly hard to believe that the State DEP still requires these terrible systems for managing our wastewater, especially since these facts have by now been known and proven for years.

Perhaps the worst harm is caused by the huge amounts of Nitrogen that we produce (6-12 pounds/person/year – that’s the amount of N in 3-6 standard 40-lb-bags of 5-10-5 fertilizer). When this joins with the Nitrogen from all the 3000 people who may live within a certain watershed area, the pond gets grossly over-fertilized with many thousands of pounds of Nitrogen. This causes devastating algae infestations, which ruin our pond ecosystems –    swimming, walking, shellfishing change from bliss to yuck.

The following gallery shows our current reality, both the problems and the solutions.  Much more information is in my latest book “Green Light at the End of the Tunnel” – including the detailed designs for the various Solviva Biocarbon Greenfilter systems, for both flush toilets and waterless composting toilets, drawn to scale with hundreds of numbered descriptions. You can order it on this website.

This schematic shows how septic systems built in accordance with State DEP regulations leach pollution straight into the groundwater, and how this pollutes our drinkingwater and causes algae infestations in our coastal ponds.

Everyone wants to protect our drinkingwater – but the State DEP are forcing us to ruin our own single-source groundwater drinkingwater aquifer. supply. We, together, are going to change those regulations. Keep tuned and plug in.

Until so very recently, our coastal ponds were so healthy, and such pure pleasure – clear clean water, scallops and baby fish darting within long stretches of lush eel grass. Pebbles and shells were clean precious jewels.

Then – when was it? – shocking changes started to occur: eel grass was overwhelmed by algae infestations, went into distress and death by the dozens of acres, followed by many more. Whole vast aquatic ecosystems asphyxiated, as all oxygen is consumed by massive layers of short-lived dead rotting algae.

Here are some trillions of the many Bad Guys who are the first to take advantage of the massive amounts of nitrogen that is constantly being delivered by the groundwater, and emanating from the thousands of Title 5 septic systems within the various watershed areas, all leaching massive amounts of nitrogen into the groundwater. All because of the leaching fields that DEP requires.

In the so very recent past, all beaches looked like this. Nowadays, sometimes it is no longer so.

Often our coastal pond beaches look like this: slimy, rotting and smelling awful, infested with pest insects, water so murky a paddle becomes invisible at 18″ depth. 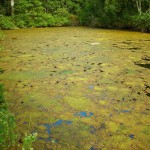 This pond was healthy – now it is sick and revolting.

A healthy ponds is a joy to behold.

Often, Title 5 installations require removal of beloved trees, shrubs and gardens – this this place, not only did it cost $20,000, but also cost 22 gorgeous trees which were cut down to make room for the new Title 5 system.

Sometimes the regulations require raised leaching mounds or bunkers filled with sand, costing $20,000-70,000. But they cause just as much nitrogen pollution as a below-ground leaching field.

In 1977, I discovered something that totally amazed me: my own urine is a fantastic fertilizer!! Peace-on-Earth! You’re-in-Charge!

Here are some of the plants that blew my mind: Indian Pokeweed grew twice as tall as usual! You’re-in-Power!

My urine fertilizer produced 350 onions on just one square meter of garden.

Those 350 onions lasted all winter.

This is my greywater management system: the drain pipe ends above a shallow hollow filled with leaf mulch and wood chips, surrounded by exceptionally luscious grasses, flowers, shrubs and trees.

This image makes it obvious why wastewater is treated ever so much better by a Greenfilter system than with a Title 5 system. The time has come to upgrade, to get toilet trained. and do the right thing.

A Solviva Greenfilter in the making: 18″ deep, lined, filled with wood chips, topped with perforated pipe.

Then covered with wire netting (to prevent dogs or other critters from digging, and then topped with topsoil, and then planted with grasses, shrubs, flowers.

This Solviva Biocarbon filter reduced nitrogen in 2000-6000 gallons of wastewater daily, down 75-91%.

This is a map of the Town of Oak Bluffs, on Martha’s Vineyard, showing how Greenfilters could have been placed in various park areas in and around town to treat the wastewater. Instead Oak Bluffs built a conventional sewage treatment facility to treat just a small portion of the wastewater, costing some $18 millions, which has already failed several times already.

Again, for the purpose of informing ever more people about the harm that is being caused by the hundreds of septic systems that leach into the groundwater within any given watershed area: some of the watershed areas on Martha’s Vineyard have hundreds, in some cases thousands, of onsite septic systems that have been built and upgraded in accordance with what is required by Massachusetts State DEP Title 5 regulations. It’s hard to believe, but the fact is that, in spite of DEP admitting knowledge of the problems, these harmful Title 5 regulations are still strictly enforced today. Now, get this if you can: because of the massive and self-evident environmental disaster that has unfolded because of pollution from T5, the DEP and the Consulting Engineers that surround them, are pressing communities ever harder to build Central Sewering. The projected price: $400-800 million for some 10,000 sites on the Vineyard, $4-9 Billion for around 110,000 sites on part of Cape Cod. When we understand the enormity of these numbers, we can begin to understand the siren song of low-hanging enormous profits to be reaped by the whole Sewage Industry, especially the Consulting Engineers –  and the sticks and carrots they must bestow upon the DEP to persuade them to cajole, pressure, scare and ensnare communities into signing Consent Decrees which forces them to borrow the millions or billions of dollars that Central Sewering costs. Oh, these are the Glory Days for Corporations, especially the Sewage Industry!  But it will soon, very soon, come to a crashing end. However, we must not underestimate the ever-harder war they will wage against those who dare to threaten their Empire. We many Davids vs. Goliath. May we have the strength to do what we feel is Good, Best and Right.           (This is where my faith in Humanity gets really shaky –  do we still have what it takes to survive as a species? Or have the complexities, stresses, greed and temptations of our times sucked the Life Force right out of us? It seems that many have given up, and most are doing little to nothing about reducing the harm they are causing, except small token steps, nowhere near what we must do if we want to survive and thrive.  People act like they are  scared to even examine and discuss what’s really going on, and what options we have for living better.        The People have abdicated their Power to the Corporations, who have lulled them into believing that the only way to avoid the fate of being trapped, freezing and starving in the dark is to use ever more oil, gas, coal, nuclear and toxic chemicals. The resulting ever more massive profits is like opium for the CEOs and and investors, who thus appear to be descending ever deeper into ever more shamefully destructive behavior, egged on by hordes of Devil’s Advocates… )

Again, the following images make it easy to understand why current State Title 5 septic regulations are so polluting –  what leaches into the groundwater from these systems, having no effective filtration, comes up in the wellwater and flows out into the ponds, especially nitrogen, but also viruses, antibiotics, toxins and hormones –  the VATHs.

And, I repeat, we now have simple solutions for this horrendous problem: the various SOLVIVA Greenfilter systems have proven capable of reducing the leaching of Nitrogen by 75-99%. They do this in shallow garden beds containing woodchips, compost, earthworms, myriads of microorganisms, and plants –  Voila!: Good management of Human Waste by complying with the Laws of Nature! Tho following image shows the difference between a Title 5 system (left) and a Solviva Greenfilter system –  it’s easy to see how we can get to Near-Zero pollution. And Greenfilter systems cost 50-90% less!!